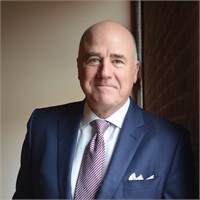 Patrick Kenney, a 1983 graduate of Miami University, Oxford, Ohio, was named to the list of Who’s Who in American Universities. With a degree in Accounting, Patrick began a career in public accounting and obtained his CPA® designation. Shortly thereafter, Patrick entered the financial services industry and is in his 31st year of running his financial professional practice.

As a Financial Professional, he has extensive experience assisting individuals and corporations in a variety of financial issues and has built a strong reputation in the industry focusing on tax-advantaged investment planning.

He holds numerous industry awards including a 25-year membership in the Million Dollar Round Table, with 15 years at Top of The Table which recognizes less than 1% of advisors worldwide.  He was Field Advisory Chair Person for Union Central, one of the country’s largest and oldest mutual insurance companies and has qualified for their National Marketing Conference every year since 1986.  In 2005, Union Central selected Patrick as the 23rdinductee into its prestigious Hall of Fame, making him the youngest inductee in the company’s 150-year history.

Besides his financial professional practice, Patrick has additional entrepreneurial experience.  In 1987, he and a college fraternity brother started Health Care Solutions, a home health care business which grew to thirty-five offices in five states and which sold in 2003 to a publicly traded industry leader.  He is a co-founder of CareLink Nursing Services which in 2015 celebrates 26 years in business.  In addition, he was a founding member of Ohio Innovations Fund, a venture capital fund which provided initial round financing to technical startup companies, one of which now trades publicly on NASDAQ.

Patrick maintains a strong commitment to local civic and charitable organizations.  He is a recipient of the Twenty Under Forty Award which recognizes individuals under the age of 40 in Northwest Ohio for leadership in their career and community.  He is currently serving on the University of Toledo Foundation Board of Trustees.  He is a past board member of Toledo Area Chamber of Commerce, Toledo Area Small Business Association, St. Francis de Sales High School, St. Ursula Academy, Toledo Botanical Gardens, St. Joseph Parish, Kids Unlimited, and Keep Toledo-Lucas County Beautiful.

In 2009, Patrick initiated an annual fundraising event to benefit University of Toledo football. To date, the initiative has successfully raised over $250,000 for the program.

In support of the Toledo Museum of Art, Patrick and his wife are members of the President’s Council and the prestigious Apollo Society.

Patrick is a licensed pilot, a marathon runner and an avid fly fisherman.  He and his wife, Maureen, have four children and reside in Sylvania, Ohio.